2018 stands to be a pivotal year for women.  The momentum built by the #metoo campaign has moved many to address the inherent problems with sexism in this country, from harassment to full-on assault.

The Golden Globes last night revealed what could prove to be some fascinating shifts in fashion as well.  A red carpet recap would typically include “who wore what” and what I personally think of the styling.  I knew that this year would look very different.

First, the women of Hollywood pledged to wear black in support of their sisters who’ve spoken out against abuses in their industry.  This also meant that the typical red carpet “glam cams,” “mani cams” (are you f*cking kidding me? Who came up with that insult?), and vapid questions for Hollywood’s actresses would not be, well, fashionable.  Substance was the order of the evening. I honestly do NOT KNOW who they were wearing and I’m glad for it.  (We will get to the ramifications of that further down)

Second, Hollywood stylists were in a SCRAMBLE to meet the needs of their clients.  Actresses use the red carpet to channel their personality, their brand, their image and with a single color option, this made the task that much harder.

While I do have my thoughts on who nailed it (the 40++ ladies were ON FIRE!!!) and who didn’t, I want to dig a bit into the messages of dresses and why we have these opinions.

you, the reader: what the hell is she doing here?  Science?  I thought this was a fashion piece….

Me: Before I get into why we have fashion as statement and why people approve or disapprove of certain styles, we gotta travel back in time.

The animal kingdom is wired for propagation of its relative species.  The females are almost unilaterally drab in color, lacking in plumage, and “safe.” They do not have traits that typically differentiate them from other females of their species. Their role is typically to mate and care for their young.  Males, on the other hand, sport things like large manes of hair or brightly colored feathers to attract the females and stand out amongst their crowd.  They have louder calls, dance, and more to find the perfect mom. 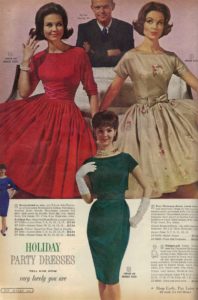 1950’s party dress ad suggesting that festive dresses show your man you care about him.

Humans are truly the first species where those roles are seriously reversed.  In current culture, women feel pressure to look and behave a certain way to attract a mate.  Our culture (media and more) sets trends to make us more “appealing.” I don’t know a woman TODAY who really says she’s dressing for a man, but there are examples as recently as the 1950’s (or closer) that showcase our role as arm piece. Dress pretty to show him you care.  Fortunately most of us dress to show OURSELVES we care, right?

When I saw Stacy London this fall (read HERE), she said this (I’m paraphrasing)

Our brains are operating with software that is tens of thousands of years old.  While we all believe we should wear what we want and when we want, we will be judged within seconds of being seen.  Our ancient ancestors had to make the determination in moments if one was friend or foe.  We still do this today.  And it means we need to have an awareness of our occasion, our audience, our surroundings and dress accordingly.  Awareness is a critical component of style and image.

As a stylist, image coach (and just lover of fashion), I do believe in the power of the message.  Our style can empower us, can hold us back, and is the best marketing piece of our personal brand.  That said, I have lots to say about last night. 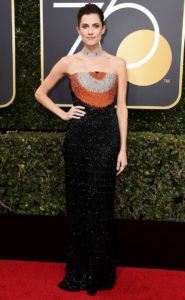 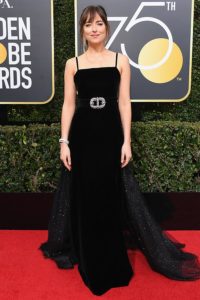 Subtle jeweled buckle and the train of Dakota Johnson’s dress were elegant.

The fashion saw lots of beading, varied fabrics, and pops of color.  With a single color to work with, starlets chose to make statements with shine and texture.

The best accessory of the night was, I believe, also a statement:  SKIN

So I’ve been cruising around the web today.  There’s a particular dress that caused a stir and I was looking (hopefully) for a statement from the actress.  While doing this, I came across questions about why women protesting sexism would wear something revealing.  One question posed in a forum was “If women want to be seen for their body of work and not their body, aren’t they doing themselves a disservice by wearing revealing gowns?”  I appreciated that it was a question, not statement, because I was able to respond and it inspired this actual post.

Knowing that their commodity/brand (their appearance) was going to be judged, they made a choice to differentiate.  They also sent a powerful secondary message:  I am in black.  I support the movement.  I have curves and breasts and THEY ARE MINE.  I am a sexual being but it does not define me, nor does it mean you are invited to sexualize me. 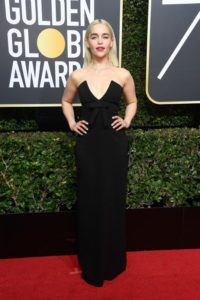 Emilia Clarke every bit the mother of dragons. 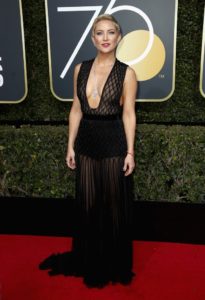 Kate Hudson always owns her body-baring style. (PS how about that necklace? SWOON!) 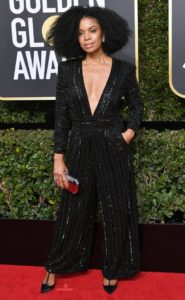 Susan Kelechi Watson in anything but gender-bending pantsuit! YASSSSS

It is right and good to not succumb to SAMENESS. The message should be that equality does not mean being the same! I want to be both feminist AND feminine!!! Must women dress like handmaidens to gain respect?  Is this what our society is asking of us when we shame women who choose to show some skin?  It is incumbent upon men to raise their eyes when they speak, isn’t it?  In suggesting that they “cannot” control that, it assumes that men are true barbarians and unevolved from our ancestors. I’ve got teenaged sons and I hope they’d be offended by that assumption.

But that ONE DRESS

Ok, so I mentioned that I was looking (hoping?Lord I was hoping) for a statement about the choice of Bianca Blanco.  Admittedly, this actress has a very limited filmography, so I didn’t know her EXCEPT that she wore this dress: 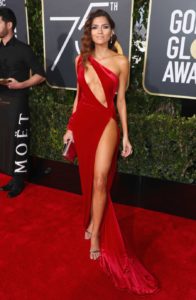 I gotta go a hard no. JUST for this awards show.

In googling Ms Blanco, I found that she chose to go without her gutchies last year on the red carpet as well (which garnered a wardrobe malfunction and drama).  I also saw a statement from her that was essentially like yeah, the movement is great and brave, but I just really liked this dress.  Shaming is also part of the problem.

Well, yes.  Shaming is.  I actually don’t mind this dress LITERALLY ANY OTHER TIME.  I, personally, wouldn’t wear it nor would I suggest it to my clients.  (HOWEVER, if I looked like her and it was part of my brand, I might wear it to the CVS on a given Tuesday)

Partially BECAUSE of her limited filmography is why I take issue to this.  It strikes me as a grab for attention on a night when the SISTERHOOD IS THE MESSAGE.  MY opinion.  Not shaming, just what I see in this choice (see Stacy London’s judging comments above).

Perhaps the thing that made me HAPPIEST was how the 40+ crowd represented.  Almost ALL of my favorites were “women of a certain age” giving zero f*cks about the rules of fashion and owning their beauty.  Among my favorites: 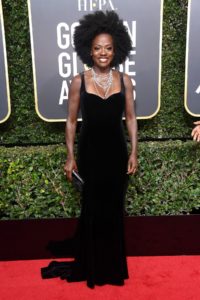 Viola Davis embraced her assets from her incredibly strong physique to her exquisite afro. And those DIAMONDS 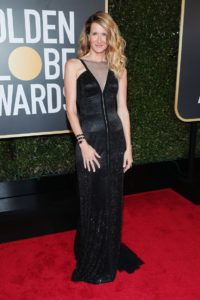 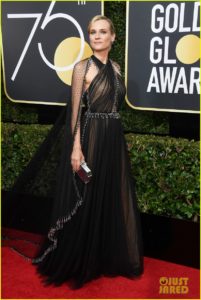 Diane Kruger is a red-carpet pro–this sheer cape is perfection. 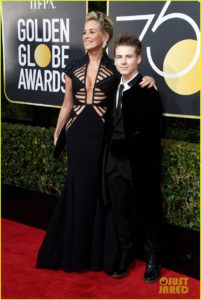 My FAVORITE of the night was Catherine Zeta-Jones.  I ALWAYS love her looks and since she is EXACTLY my age, has kids exactly the ages of my kids, and has embraced her struggles and advocates for mental health, I feel like we are pretty much sisters.  She SLAYED in this sheer gown-over-bikini-look. 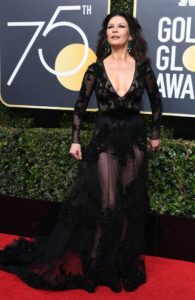 Some of my other favorites: 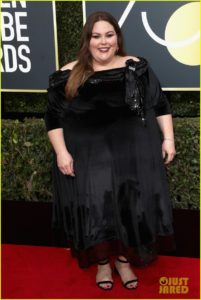 Chrissy Metz is just so beautiful. I loved her OTS dress and her makeup was ON POINT. Gorgeous! 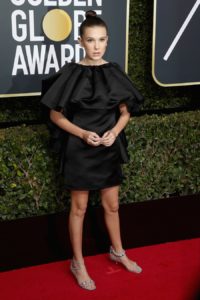 Keep your eyes on Millie Bobby Brown, people. This girl has style in spades. She kills it every. single. time. 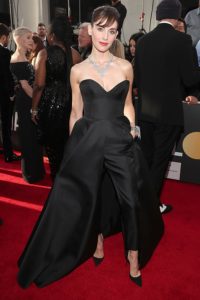 Alison Brie’s pants/dress hybrid is a favorite style of mine and she killed it. Perfect shoes and accessories. 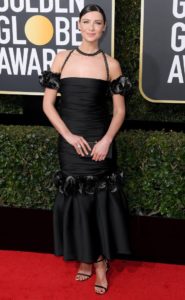 Oh, Catroinia–those arm bands. And the ruffle layer. You are so beautiful and we barely notice you with all that’s going on in this dress. sigh. 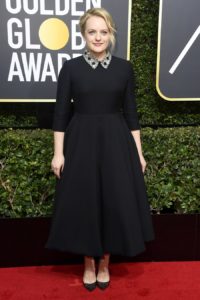 Elizabeth Moss taking her role in Handmaid’s Tale to the red carpet…Love the dress, but not for the Globes. Yawn.

While I applaud how celebs and stylists rose to the challenge of differentiating in the midst of this new era, I do wonder what the ramifications will be for the remainder of awards season from the designer’s standpoint.

With no one being asked “who are you wearing?” will designers clamor to dress Hollywood?  Will we get reveals BEFORE the event via social media since substantive questions are de rigeur?  Who’s to say, but it will be interesting to watch it unfold.

That said, with my OWN Oscars gala coming up, I am hoping we are back to embracing COLOR.

Let me know your thoughts–agree? Disagree?  Let’s have some discussion!

What’s this ENNEAGRAM Everyone is Talking About?